PES prime ministers, leaders and European commissioners today urged the European Council to reach an agreement on the recovery and MFF which fully respects the Rule of Law. Citizens should not be denied European values or a recovery from the coronavirus crisis.

“We cannot enter 2021 with the 2020 budget, as if COVID-19 never happened. Socialists have stood ready to back the recovery and MFF agreement for several months now. It is time for all heads of government to support this deal and to find a way forward which fully respects the Rule of Law.

“The economic and social consequences of the COVID crisis are not behind us. Citizens and businesses are still in need of vital help. We urge the Hungarian and Polish governments to do the right thing so support can finally be mobilised. I thank the SPD in the German Presidency who are doing their utmost to find a solution.

“The PES expects European values to be upheld in this agreement. We cannot allow the Rule of Law to be sacrificed. The foundational values of the European project are not up for negotiation.”

Earlier this month the PES Presidency called for the EPP and ECR to support democracy and prosperity for all Europeans.

Today’s pre-summit meeting welcomed the positive developments on effective vaccines against COVID-19 and reiterated that this welcome progress is only one element of the strategy to counter the virus. Epidemiological challenges remain which Member States must tackle through cooperation, coordination and solidarity to avoid a third wave emerging. The meeting underlined that approved vaccines must be distributed quickly, guaranteeing affordable and fair access for all, and in a way that is coordinated at the EU level.

PES prime ministers, leaders and European commissioners welcomed the social dimension of today’s European Council and pledged to continue pushing for progressive solutions like SURE, a fair SGP and the Youth Guarantee to address the social and economic consequences of coronavirus. The social aspect will also be central to the Portuguese Presidency of the Council of the EU; Antonio Costa and Partido Socialista have the full support of the PES political family to progress this agenda, which will be the focus of the Porto Summit in May. The prime ministers, leaders and European commissioners thanked the SPD for the important work and successes they have achieved through the German Presidency.

The meeting welcomed the ambitious climate action being put in place under the European Green Deal and expressed support for the EU target to reduce domestic greenhouse gas emissions by at least 55% by 2030, compared to 1990. Social fairness and solidarity must remain central as we face the climate challenge and work to secure progress as we approach COP26.

PES prime ministers, leaders and European commissioners expressed concerns that ongoing EU-UK negotiations have not concluded successfully. The PES supports a deal and urges the UK government to commit to a level playing field so a fair EU-UK relationship can be maintained.

On external relations, the meeting welcomed signals that United States president-elect Joe Biden will strengthen the EU-US relationship and international efforts to tackle the COVID-19 pandemic, climate change and other issues. The meeting once again reiterated its support to Greece and Cyprus in the face of continued tensions with Turkey in the Eastern Mediterranean, and for the resumption of negotiations on EU accession for North Macedonia. 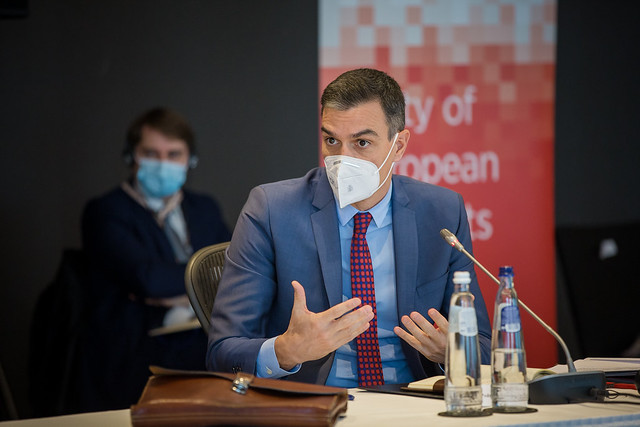