The European Council must reach an agreement that allows the EU to deliver on progressive priorities like the Green Deal, the European Pillar of Social Rights and to endorse the Rule of Law, the PES said at a European Council preparation meeting in Brussels today.

Prime Ministers, Commissioners and leaders from the progressive political family convened ahead of the Special European Council meeting on the next multiannual financial framework (MFF).

“Council President Charles Michel has a duty to find a route through for the MFF. If he fails, the ambitions progressives put on the European Commission’s agenda will be left in limbo. The level of financing must meet the level of these ambitions.

“We want pivotal change in Europe. We have made a strong case for this, on the climate transition, on the rebalancing of the social and economic, and on so many other issues. Now the resources are needed to realise this potential in the new mandate.

“Any outcome today which diminishes these progressive objectives would be disastrous for our collective duty to make Europe fairer and more sustainable. We cannot afford to disappoint citizens. At the end of the mandate we will need to show our promises are not only words, they count.”

The PES stands firmly for a positive change in Europe. We have been the driving force behind the European Green Deal and a just transition that leaves no one behind, proposals on minimum wages, stronger social rights, the child and youth guarantees, reform of the European semester, the gender equality strategy, and more.

Thanks to the efforts of the progressive political family, these ambitions have been adopted by the European Commission and will be overseen by Commissioners from the progressive political family. The MFF is vital for ensuring the funds exist to support these policies. It is through these measures that we demonstrate the value of the EU to citizens.

Discussing the Council’s current ‘negotiating box’, the meeting expressed disappointment that it departs from previous proposals on the Rule of Law mechanism. Progressives have been relentless in the defence of European values, and we do not believe the mechanism should be watered down. Equally disappointing is the slowing of the increase in Erasmus funds, which sends an unfortunate signal at a time when the EU should be supporting measures which nurture European identity.

Sergei Stanishev, President of the PES

Josep Borrell, High Representative of the Union for Foreign Affairs and Security Policy and Vice-President of the European Commission

Maroš Šefčovič, Vice-President of the European Commission for Interinstitutional Relations and Foresight

Iratxe Garcia, President of the S&D in the European Parliament 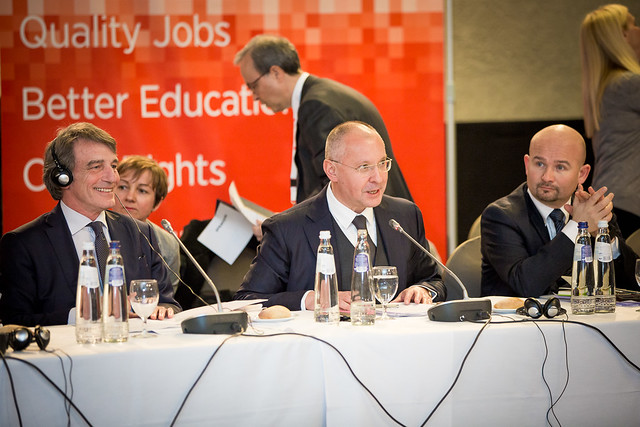