Prime ministers and party leaders from the Party of European Socialists called for a united response to Europe’s challenges when they met to prepare common positions for the European Council meeting this afternoon.

Discussions among the socialist and social democrat leaders focused particularly on the upcoming social summit in Gothenburg on 17 November, and the urgent need to adopt not only a strong European pillar of social rights but an action plan to guarantee that its aims will actually be put into practice.

Leaders also exchanged views on approaches to a common migration strategy, and the importance of supporting development in Africa.

“We are disappointed to see that there is still no mention of Europe’s social issues on the agenda of today’s European Council meeting, despite the urgent need for action. PES will continue to seize every opportunity to promote these issues.

“At the same time as making progress towards a more social EU, we must also act in solidarity to tackle the other challenges we face. The migration crisis demands a comprehensive European approach based on the principles of shared responsibility, with strong cooperation with our partners in Africa and beyond. And we must ensure enough funding for the approach to be effective.

“The focus on the digital single market in today’s European Council agenda is very welcome. Progressive voices have a distinctive contribution to make here, to ensure that progress in the technological sphere does not come at the expense of workers’ rights or quality jobs. We will continue to fight for the decent jobs and strong social protections that the people of Europe deserve.”

Before the meeting, PES leaders met with hundreds of delegates at the ‘Together’ conference which brought together progressive parties and organisations from across Europe.

In attendance at the meeting were: 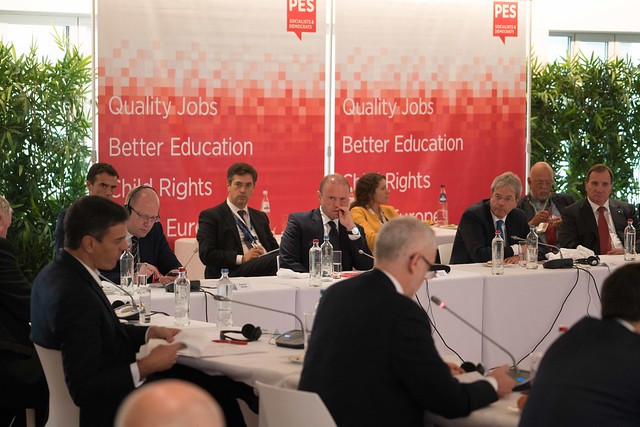